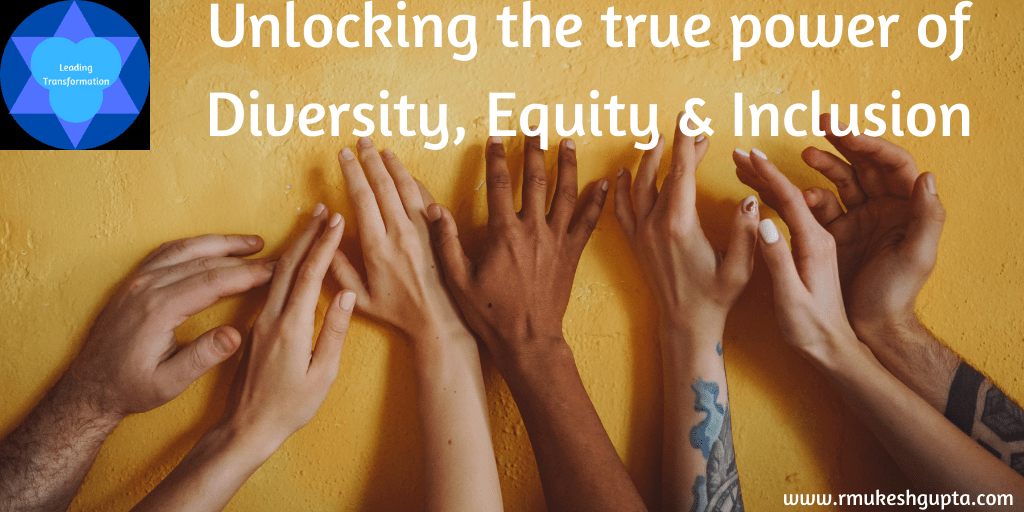 Diversity, Equity and Inclusion is on top of every organisation – social or entrepreneurial and every leader worth their salt is thinking about how to make their culture more inclusive and equitable for all members of the tribe.
In this blog I want to warn leaders about the risk of ignoring one or more of the trinity of values (Diversity, Inclusion & Equity) in favor of the others.
I was talking to one of my friends yesterday. He leads a large team and said that he was hiring and wanted to check with me if I knew someone for the job. I recommended a couple of names and he said that he needs to hire a woman and an early talent at that.
When I asked if it was relevant for the job and if it is advertised as such, he just said that he has a target of having a certain percentage of his team to be early talent, a percentage of gender diversity, which is not the case as of now. So, he needs to hire a woman, who is an early talent as well.
This approach to increasing diversity, which is great to improve gender balance within the organisation, but is only a partial and a short-term solution. This leads to an imbalance on the “Inclusion” and “Equity” front. If we really want to access the true power of DE&I, it is critical that we maintain the balance.
Does this mean that leaders should not prioritize hiring those who are under-represented? Absolutely not. That should happen but not at the cost of the other two values of “Equity” and “Inclusion”.

It is easy to criticise but is there a better way?
I believe there is. Here is one.
As leaders, here are a few things that we can do to help the situation:

We can follow the same process when we are promoting someone or letting go of someone as well.
Some might argue that this creates additional work and might delay the entire process of hiring. This could impact the business. That could not be further from the truth.
All that we are doing above is making what is already happening (I hope this is happening) transparent. So, there are no additional steps involved here except for clear, transparent communications.
Having said that, what this process would do is the following – keep the trinity of values – Diversity, Equity and Inclusion in balance. This level of transparency has a few additional benefits:

This was one way to address the potential imbalance in DE & I. Have you seen any other way? As a leader, have you figured out a way to keep them all in balance? I would love to hear & learn from you about the same. Please share your thoughts and comments by commenting below or on your favourite social media platform