Many semiconductor stocks have had a rough time after earnings. AMD, UCTT, FORM, AEIS, and now RTR position NVMI have all been hit. 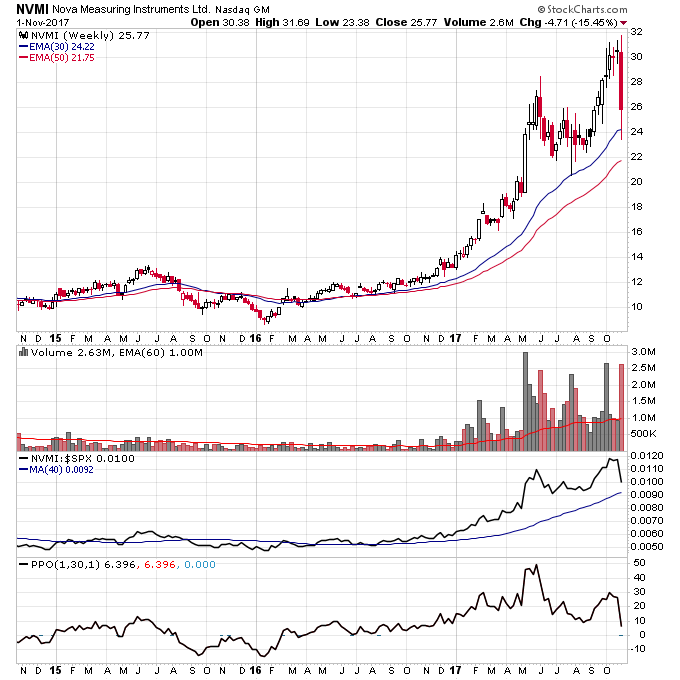 While NVMI is still in Stage 2 I’ve decided to close out my position in the stock today. Fortunately I reduced position sizes in all of my stocks that had upcoming earnings.

This allowed me to take profits in stocks like NVMI and COHU ahead of earnings.NVMI was up over 20% since. I’ll take a small loss though on my remaining shares in NVMI unless it moves a little higher. I’m also going to close out COHU and INTT today.

They both have earnings after the close today and based on the way other semiconductor shares have traded I’m not sure its worth the risk holding into earnings. I have no idea how those stocks will trade after earnings, they could go up or down. COHU I’ll take a small gain on and INTT I’ll be taking losses on. INTT hasn’t traded well since it gapped higher and it has closed the gap since then, and it is about to fall below the gap support.

It’s certainly possible these stocks just consolidate and keep moving higher. But since I have other trades that are working better (DAIO, TEAM, TWTR), I’d rather either add to those positions or find other setups without the overhead resistance that now exists in these semiconductor shares. TEAM and DAIO especially are turning into monster winners, and TWTR is trading well so far the week after it surged higher. It’s quite possible we are seeing a rotation out of semiconductor names after earnings which isn’t surprising since they have been performing so well.

Had I not taken any profits on the way up in NVMI I’d have nothing to show for it after holding for a couple months. Which is another example of why I’m a big fan of taking partial profits off the table when you get them. All of the positions I take in stocks I trade in increments, if a stock continues to go up I will increase my position size but also take a portion of the profits and reduce position size when I get them.