An Inflation Indicator To Watch, Part 2

“Inflation comes from too much money chasing too few goods.”
–Many an economics professor

But does it really?

In Part 1 of this series, I said I would challenge popular beliefs about inflation, while at the same time proposing an alternative theory. I also promised that the theory leads to an inflation indicator with an excellent prediction record, and I’ll define the indicator in this article. Considering inflation determines bull and bear markets in both stocks and bonds, that’s my big pitch.

But first, here’s a recap.

In the last article, I argued we should stop fixating on M2, as economists do, and focus instead on the amount of money banks pump into the economy when they deliver loan proceeds. Bank-created money, which I call “M63,” flows directly into GDP, thanks to the charters that allow banks to produce money from nothing when they make loans or buy securities.

Here’s a chart from the earlier article: 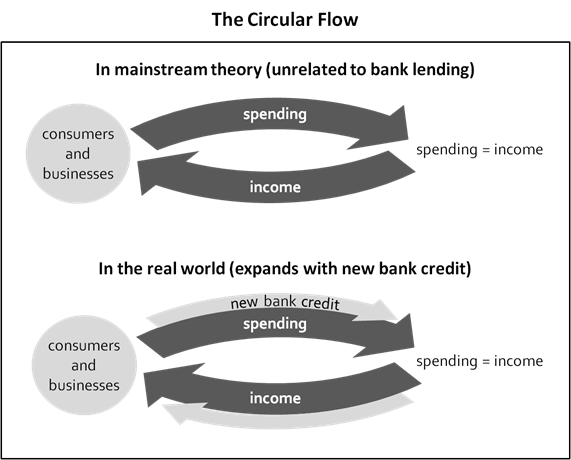 The chart shows bank loans lifting spending above the amount spenders can fund from prior income, which fattens the circular flow, boosting GDP. Bank-funded spending might lift real GDP or inflation, or both, but however it works into the economy, we can find a correlation with nominal GDP. And we can demonstrate the correlation with either loan or money data, as long as we define money as bank-created money (M63), not M2.

You might wonder, though, if bank-created money outperforms M2, why do mainstream economists rarely discuss it?

To restate a few more points from Part 1, the answer lies partly in the backstory of the 1960s and 1970s, when the economics gods pulled a bait-and-switch. The gods baited Milton Friedman and Anna Schwartz with ninety-four years of M63 data, and Friedman and Schwartz then analyzed and wrote up the data in their magnum opus, A Monetary History of the United States, 1867-1960. Within ten years, the book was a classic, and Monetarism had become a key building block in mainstream economics. Thanks to M63, Friedman and Schwartz reached their profession’s pinnacle while becoming household names outside of it.

But somewhere along the way, the gods pulled their switch.

Instead of continuing to channel M63, they directed economists toward measures such as M2, which better matched the profession’s long-time fascination with the intrinsic characteristics of money (such as liquidity, stability and value as a medium of exchange). Economists were well-accustomed to treating money as an independent force that’s mostly unrelated to bank lending, and a close look at ninety-four years of history wasn’t powerful enough to break old habits. In fact, most economists were unaware of the differences between the traditional money measures that dominated their discussions and the M63 measure that Friedman and Schwartz studied, and they might still be unaware. Even Friedman and Schwartz gave no indication they considered the differences significant.