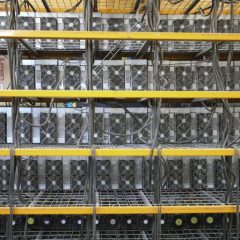 With approval for a conventional cryptocurrency ETF still nowhere in sight, at least one U.S. money manager is looking to tap one of the other hot trends on the blockchain. Defiance ETFs is launching the Defiance Digital Revolution ETF (ticker NFTZ) on Thursday, which will track a blockchain-related-companies and non-fungible-token index. It won’t invest in any cryptocurrencies directly – the gauge tracks firms that have exposure to the industry – but it is one of the first ETFs to tap the booming market for NFTs. The U.S Securities and Exchange Commission allowed an ETF that holds Bitcoin futures to begin trading in October, the closest regulators have come to approving a fund that invests in cryptocurrencies. Blockchain thematic ETFs have proliferated while the SEC rejected numerous applications for a spot ETF over the last several years. The NFTZ fund “is a great way for investors to gain access to not only the fast-growth blockchain technology aspect of the digital world, but companies involved in the renaissance of NFTs,” said Sylvia Jablonski, chief investment officer for Defiance ETFs. “The companies in this index are key players in the build-out of Web 3.0,” or an idealized version of the internet that is decentralized and based on blockchains. The fund carries a management fee of 0.65%, meaning $6.50 for every $1,000 invested. Its top positions are in Silvergate Capital Corp., Cloudflare, Inc., Bitfarms Ltd., Marathon Digital Holdings Inc., Hut 8 Mining Corp. and Coinbase Global Inc., among others. NFTs, which allow holders of art, collectibles […] 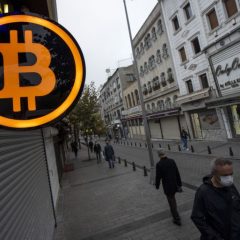 Bitcoin is staging a comeback along with other riskier assets on Monday, bouncing back from its Black-Friday lows. The largest digital asset rose as much as 3.4% during the session to trade around $58,266. Other coins also posted snap-backs, with the Bloomberg Galaxy Crypto Index adding 5.5% at one point. So-called alternative coins like Polkadot and Dogecoin gained too. A brutal selloff Friday saw investors fleeing a number of riskier assets, including cryptocurrencies, with Bitcoin posting its worst day in roughly two months. The drubbing came after the announcement of a new coronavirus variant named omicron that was identified in southern Africa and which experts are now trying to understand. The session’s decline saw Bitcoin drop 20% below a record high notched earlier in November, which for many strategists showcases the coin’s tendency to closely track moves of the broader stock market. “It highlights that Bitcoin is a risk-on/risk-off asset,” said Matt Maley, chief market strategist for Miller Tabak + Co. Meanwhile, in a development that is quintessentially cryptonian, a coin called Omicron crashed and then recovered as news of the eponymous variant spread. Though little is known about the coin thus far, data on CoinGecko.com shows it’s been in existence for a few weeks and that its market cap hovers around $370 million. Bitcoin has been under pressure since reaching a record of almost $69,000 Nov. 10 on enthusiasm over the first U.S. exchange-traded fund linked to futures of the digital asset. But a multitude of factors have weighed on returns since then, […] 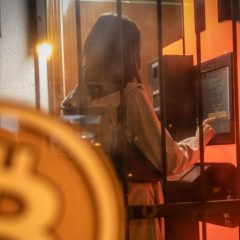 Bitcoin tumbled 20% from the record high it notched earlier this month as a potentially worrisome new variant of the coronavirus spurred traders to dump risk assets across the globe. The world’s largest cryptocurrency fell as much as 9% to $53,552 on Friday. Ether, the second-largest digital currency, dropped more than 12%, while the wider Bloomberg Galaxy Crypto Index declined as much as 7.7%. A new variant identified in southern Africa spurred liquidations across global markets, with European stocks falling the most since July and U.S. equity benchmarks also trading lower. Bitcoin wasn’t spared from the carnage despite increasingly being seen by many crypto enthusiasts as a hedge against financial-market turmoil. And even as Bitcoin has gained more mainstream acceptance, the cryptocurrency is still prone to wild swings. “To us, it is still by and large a risk asset,” said Ross Mayfield, investment strategy analyst at Baird. “When things get kind of scary, there are going to be sellers.” Meanwhile, gold — a traditional safe-haven asset — climbed as much as 1.5% Friday morning, though the precious metal has still significantly underperformed Bitcoin year to date. “I think the role that Bitcoin will eventually play is still uncertain. The role that something like gold and Treasuries play is pretty well known at this point. So the conclusion is that when things really look ugly, the traditional safe havens will rise to the top,” Mayfield added. The variant news that roiled markets wasn’t the only negative factor weighing on Bitcoin. Coming […] 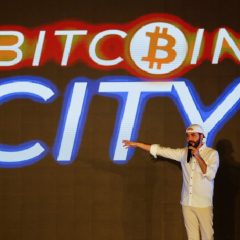 El Salvador plans to build the world’s first “Bitcoin City”, funded initially by Bitcoin-backed bonds, President Nayib Bukele says, doubling down on his bet to harness the cryptocurrency to fuel investment in the Central American country. Speaking at an event closing a week-long promotion of Bitcoin in El Salvador, Bukele said the city planned in the eastern region of La Union would get geothermal power from a volcano and not levy any taxes except for value-added tax (VAT). “Invest here and make all the money you want,” Bukele, dressed all in white and wearing a baseball cap backwards, said in the beach resort of Mizata on Saturday. “This is a fully ecological city that works and is energised by a volcano.” Half of the VAT levied would be used to fund the bonds issued to build the city, and the other half would pay for services such as garbage collection, Bukele said, estimating the public infrastructure would cost about 300,000 Bitcoins ($17.7bn). El Salvador in September became the first country in the world to adopt Bitcoin as legal tender. Although Bukele is a popular president, opinion polls show Salvadorans are sceptical about his love of Bitcoin, and its bumpy introduction has fuelled protests against the government. Likening his plan to cities founded by Alexander the Great, Bukele said Bitcoin City would be circular, with an airport, residential and commercial areas, and feature a central plaza designed to look like a Bitcoin symbol from the air. “If you want Bitcoin to […] 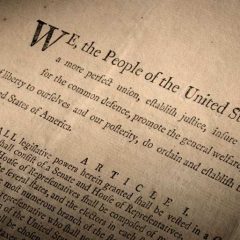 A rare first printing of the United States Constitution sold at Sotheby’s New York Thursday night for $43.2m – the highest price ever fetched at auction for an historical document –  to a buyer who beat out a group of cryptocurrency enthusiasts who still claimed a victory for crowdfunding. A Sotheby’s spokesperson late on Friday afternoon identified the buyer as entrepreneur Kenneth Griffin, founder and CEO of Citadel, a hedge fund based in Chicago, Illinois. Griffin says he plans to loan the Constitution to Crystal Bridges Museum of American Art for public display. “The US Constitution is a sacred document that enshrines the rights of every American and all those who aspire to be,” Griffin said in a statement. “I am pleased that Crystal Bridges Museum of American Art in Bentonville, Arkansas, which always offers free admission, will be the first venue to display our country’s foundational document.” The first printing of the Constitution – one of only 13 surviving copies that are privately owned – sold for more than double Sotheby’s top estimate range of $20m. The winning bid also marked a sharp appreciation from the $165,000 the document sold for back in 1988 to the late real estate developer and collector of American documents and manuscript, the late S Howard Goldman. All proceeds for the sale will go to a foundation established by Goldman’s widow Dorothy. The sale was being closely watched not only for the historical significance of the document, but for the hype surrounding a cryptocurrency […]