Beware Of The Real Debt Crisis On The Horizon

Home » Beware Of The Real Debt Crisis On The Horizon

We have to come to the reality that from 2019 onward, we are headed into a Pension Crisis that will be serious. Many are starting to yell about the debt crisis. They lump on private debt and yell its a bubble. What they miss entirely is the fact that we face more than a decade of crises that would have been avoidable, had governments been actually managers and central bank had not tried to keep using Keynesian Demand Side Economics that even Paul Volcker warned back in 1978 had failed.

This is by no means prophecies of doom and gloom. Unfortunately, they are prophecies not even of a pessimist, but only facts that are comprehensible simply using a pocket calculator and not even a computer. The Pension Crisis is the end of Socialism. Promises that were made which were never sustainable but were a scheme to win votes. Then the money needed to pay the pension required 8% interest annually. Then the central banks enter the game and mess everything up even more. Instead of DIRECTLY aiding the economy, they lower rates and HOPE that the banks will pass it along. They never did. The banks parked the money at the Excess Reserve Window that the Fed has still not closed. 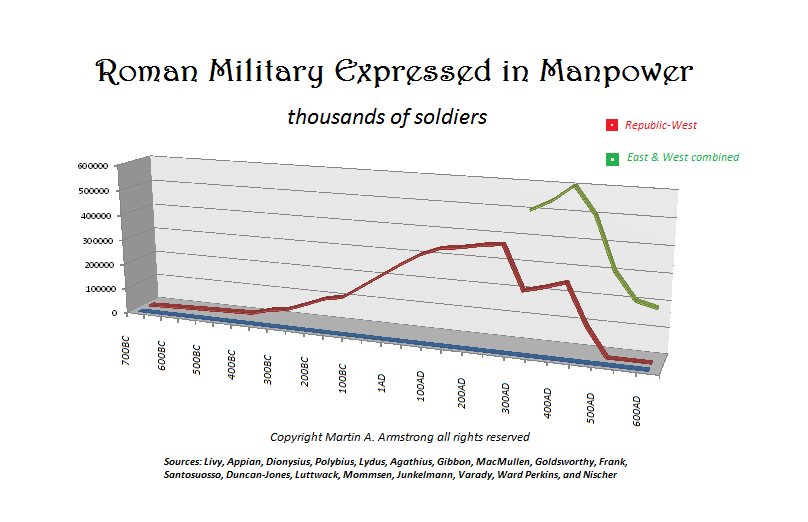 The cost of pensions is currently stifling Western society beyond belief. Europe itself is ahead of the curve and will crack before the United States. Europe already has between  30% to 40% of the population who have already retired or are about to leave the labor market. They have used the old Roman pension system of the army which was earning an average of 20 years service to qualify for a pension. It was the pensions which contributed to the Decline and Fall of the Roman Empire.

We have to realize that government state pensions are the real crisis. Like California, their solution is always to raise taxes to pay for government pensions. The amount of social insurance contributions and taxes is determined by the cost of providing retirement benefits. The Fed is trying to raise rates, but they fear raising them back to 8% too fast will disrupt the economy. The pressure is building on the ECB in Europe behind the curtain to stop this nonsense of Quantitative Easing that has failed to start with and is now the cause of a massive Pension Crisis for the next 10 years. This condition of a shortfall cannot change immediately and raising taxes to try to solve the problem will only lead to further economic decline.