Wall Street Is One Sick Puppy

The robo-traders – both the silicon and carbon based varieties – were raging again today in celebration of a “goldilocks” jobs report. That is, the headline number for April was purportedly strong enough to sustain the “all is awesome” meme, while the sharp downward revision for March to only 85,000 new jobs will allegedly enable the Fed to kick-the-can yet again – this time until its September meeting. As one Cool-Aid drinker put it,

“Probably best scenario in which the market was hoping for growth but not (so strong) that the Fed needs to hike in June,” said Ryan Larson, head of U.S. equity management at RBC Global Asset Management (U.S.).

Today’s knee jerk rip, of course, is the fifth one of roughly this magnitude since February 20th, but its all been for naught. The headline based rips have not been able to levitate the S&P 500 for nearly three months now. 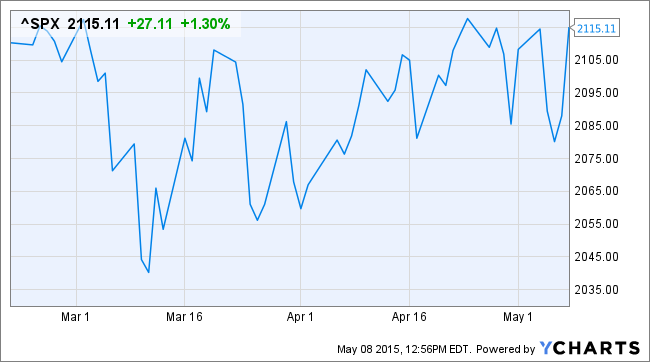 In fact, however, the incoming data since February 20 has been uniformly bad. The chop depicted in the graph, therefore, only underscores that the market is desperately churning as it attempts to sustain an irrationally exuberant high. Indeed, today’s jobs data was not bullish in the slightest once you get below the headline. Specifically, the number of full-time jobs dropped by 252,000 in April – hardly an endorsement of the awesomeness theme.

True enough, the monthly number for this important metric bounces around considerably. Yet that’s exactly why the algo fevers stirred by the incoming data headlines are just one more piece of evidence that the stock market is completely broken. What counts is not the headline, but the trend; and when it comes to full time jobs there are still 1.1 million fewer  now than at the pre-crisis peak in Q4 2007.

Needless to say, a net shrinkage of full-time job after seven and one-half years is not exactly something that merits a 20.5X multiple on the S&P 500 or 75X on the Russell 2000. That’s the case especially when that same flat lining jobs trend has been underway for nearly a decade and one-half. To wit, since April 2000, the BLS’ full time job count has grown at only a0.35% annually.

ECRI Weekly Leading Index: WLI At 5.5% YoY
Why We Became A Believer In Amazon Stock
Waiting For The NFP