Americans’ confidence suffered its biggest weekly setback in more than a year as optimism about personal finances slumped according to Bloomberg’s Consumer Comfort Index figures.

The headline index is down 4 of the last 5 weeks… the biggest drop since Sept 2016. 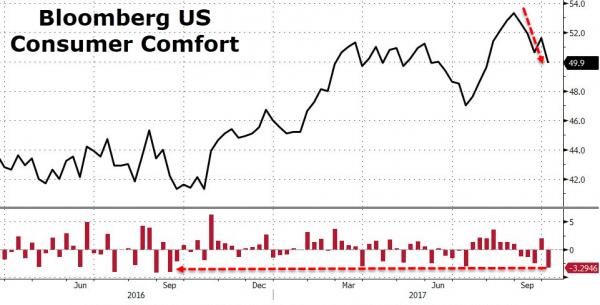 As ‘Personal Finances’ plunge (despite soaring record highs in stocks… 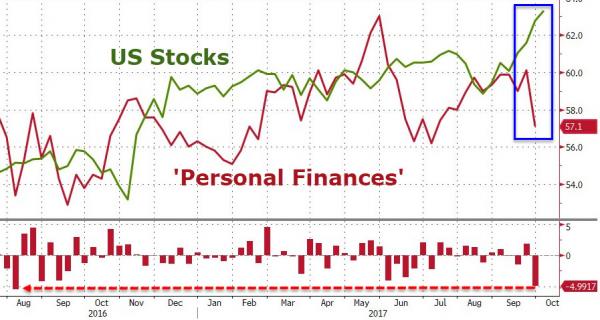 However, one interesting data point is that sentiment among black respondents rose to its highest level since November and fell among whites to the lowest since mid-July… 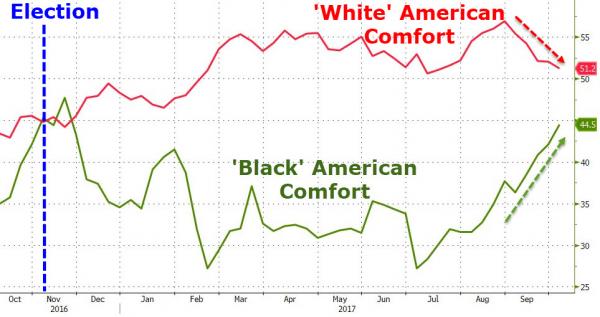 Bloomberg highlights the key takeaways as:

The data marked the fourth decline in the last five weeks following a 16-year high at the end of August. The index, now the lowest since July, is down 3.4 points from that peak.

The weakness was driven by a sudden drop in optimism about personal finances, which had reached a three-month high a week earlier. The result may partly reflect what Americans are paying at the gas pump, as prices remain elevated after climbing sharply in response to Hurricane Harvey.

Sentiment was particularly weak among women, with the gauge falling to the lowest level since January on more concern about personal finances and the economy. In contrast, male respondents were more upbeat, leading to the widest gender gap since December 2006.