Shortly after we reported that the “restaurant industry hasn’t reported a positive month since February 2016”, we can add one more month to the running total: according to the latest update from Black Box Intelligence’s TDn2K research, in July both same-store sales and foot traffic declined once again, and this time the slide was more pronounced, tumbling by -2.8% and -4.7% compared to declines of “only” -1% and -3% in June, respectively, in the process extending the stretch of year-over-year declines for the US restaurant industry to 17 consecutive months – the longest stretch since the financial crisis. 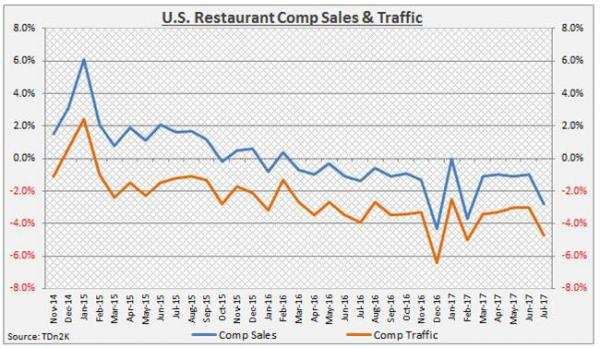 Sales rose in only 12 markets while declining in 183 with the Midwest – the worst region in the US – suffering a 3.6% and 5.2% decline in sales and traffic respectively, while even the best region, California”, posted a decline in both sales (-0.7%) and traffic (-3.6%). 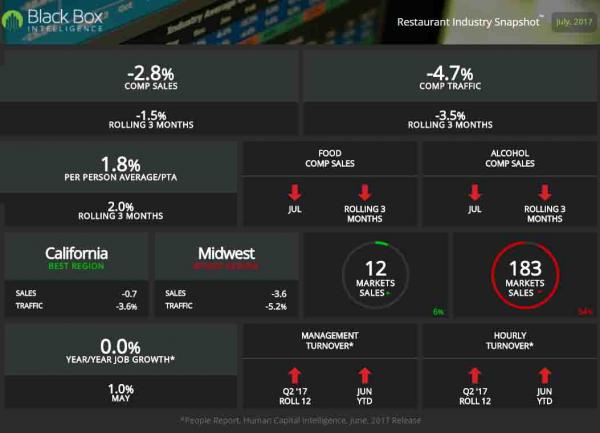 Unlike restaurant industry hasn’t reported a positive month since February 2016, not even Black Box Intelligence’s TDn2K research tried to spin the data, noting that the “sales rebound optimism was short lived” as “July restaurant sales tumbled.”

“July proved to be a tough month for chain restaurants,” said Victor Fernandez, Executive Director of Insights and Knowledge for TDn2K.

“Based on recent trends, we were cautiously optimistic that the tide was turning a bit, especially since brands were comparing against weaker comps in 2016.” But not so much any more.

According to Black Box, calculated on a two-year basis, sales in July 2017 were down -4.2% compared with July of 2015, in other words there has been no growth in over two years. The data is even worse for same-store traffic, which was down -8.7% for that same period. These are the weakest two-year growth rates in over three years, additional evidence that the industry has not reversed the downward trend that began in early 2015.

In light of the surprisingly poor monthly results, the consultant appear to have not only given up on any recovery in the restaurant sector, but are now extrapolating the weakness to the broader economy.

“While the economy keeps growing at a moderate pace and job gains remain strong, the consumer seems to be on vacation – literally and figuratively,” said Joel Naroff, President of Naroff Economic Advisors and TDn2K economist whose Industry Snapshot tracks sales at 27,000 restaurant units from 155 brands, generating $67 billion in annual revenue. That’s about 10% of total “eating and drinking places” revenues as tracked by the Commerce Department