The ways in which we think about learning, intelligence, and our abilities has a direct and significant effect on our learning progress and our ability to improve.
When we believe that we can do and be better according to the effort we put in, we are embracing a growth-based mindset. Conversely, when we believe that we’re just not good enough or capable enough to learn, achieve, or do something challenging, we set ourselves up to fail…thus proving ourselves “right.”
What Is a Growth Mindset?
The growth mindset was discovered by psychologist and Stanford professor Carol Dweck, Ph.D., and is described in her book Mindset: The New Psychology of Success. According to Carol, mindset is a self-perception (I am a great speaker; I am a bad dancer) that is either “fixed” or focused on “growth.” 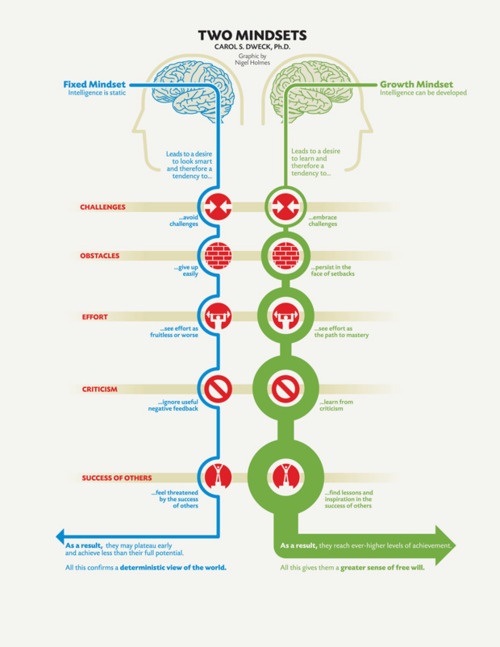 Those with a fixed mindset believe that talent rather than effort is solely responsible for success. Fixed mindsets are naturally limiting, since failure is perceived as inevitable. Those with fixed mindsets believe they aren’t good at something because they don’t possess an inherent trait or ability. So when they perform badly, the failure is seen as inherent in their lack of ability.
On the other hand, those with a growth mindset “believe that their most basic abilities can be developed through dedication and hard work—brains and talent are just the starting point. This view creates a love of learning and a resilience that is essential for great accomplishment,” writes Carol.
Top 7 TED Talks to Develop Your Growth Mindset
1. Shawn Achor | “The Happiness Advantage: Linking Positive Brains to Performance”

Credentials: Shawn Achor is a New York Times bestselling author (Before Happiness, 2013; The Happiness Advantage, 2010), and one of the world’s leading experts on the connection between happiness and success. He is the Co-Founder and CEO of Good Think, which bridges the gap between academic research and the real world through instructive, inspirational, evidence-based messaging.
Shawn’s research and lectures on happiness and human potential have received attention in The New York Times, Boston Globe, The Wall Street Journal, as well as on NPR and CNN Radio.
Summary: Based on his research and 12 years of experience at Harvard, Shawn clearly (and humorously) describes how to increase happiness and meaning, raise success rates and profitability, and create positive transformations that ripple into more successful cultures. He highlights how 90% of our long-term happiness is predicted by the way our brains process the world, and describes how changing our mindset will change our reality. 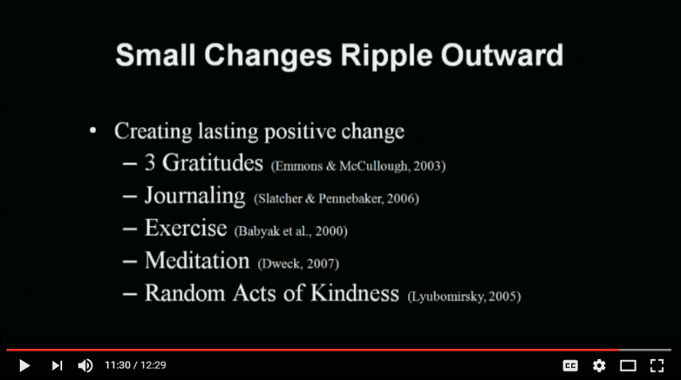 The best parts of this TED Talk come when Shawn refutes many long-held assumptions about happiness. For instance, 75% of job success is predicted by our levels of optimism, social support, and ability to see stress as a challenge instead of a threat.
Shawn states that most modern research focuses on the average person and their abilities, but that “if we focus on the average, we will remain merely average.” Who wants that?! Surely, you don’t want that. Otherwise, you wouldn’t be reading through this list…!
Takeaway: As a society, we’ve pushed happiness “over the cognitive horizon,” thinking we must be successful before we can be happy. So don’t change “the goal post of what success looks like.” Instead, allow yourself to adapt to the world in a more positive way by rewiring your brain. Shawn explains how to accomplish this in just two minutes a day.
Bonus: This is likely the most humorous TED Talk you’ll ever see.
2. Dr. Lara Boyd | “After Watching This, Your Brain Will Not Be the Same”

Credentials: Dr. Lara Boyd is at the cutting edge. In 2006, she was recruited by the University of British Columbia to become the Canada Research Chair in Neurobiology and Motor Learning. Her efforts are leading to the development of novel, more effective therapeutics for individuals with brain damage while also shedding light on broader applications.
Summary: Our knowledge of the brain is evolving at a breathtaking pace. In this classic research-based TEDx Talk, Lara describes how neuroplasticity gives us the power to shape our brains. By learning new concepts, taking advantage of opportunities, and participating in new activities, we are physically changing who we are, and opening up a world of endless possibility. Pretty cool, right?!
Takeaway: “Nothing is more effective than practice. You’ve gotta do the work.”
3. Eduardo Briceno | “The Power of Belief: Mindset and Success”

Credentials: Eduardo Briceño is the Co-Founder and CEO of Mindset Works, an organization that helps schools and other organizations cultivate a culture based on a mindset of growth. Mindset Works offers Brainology, an innovative learning program to teach this mindset to students, teachers, and schools.
Summary: Our success is fostered or hindered depending on the way we understand our intelligence and abilities. Eduardo highlights social science research as well as real-life examples to illustrate how mindset influences prosperity and learning in our lives. He discusses the mindset concepts of fixed and growth, and how avoiding challenges (fixed mindset) when things get tough is like driving a nail in the coffin of your own opportunities for success.
Recommended For You Webcast, March 26th: Maintaining Your Marketing Momentum in Uncertain Times and Why Deterministic Attribution is Key
Register Now
The physiological aspects of mindset should not be ignored. We must focus our self-praise on process-oriented rather than talent-centric aspects of our abilities. For instance, focusing on how well we perform (via a grade or score) causes us to worry about being judged versus putting our focus on learning. The best practice here is to focus on the effort involved in the way we gain skills and grow.
We embrace a mindset of growth when we work hard to improve ourselves.
Takeaway: There are clear actions we can all take to establish a growth-based mindset and enable our success. Science-based evidence proves that when we more readily adopt learning-oriented behaviors (such as deliberate practice and grit), we are better able to achieve our goals.
4. Angela Lee Duckworth | “Grit: The Power of Passion and Perseverance”

Credentials: Speaking of grit! Angela Duckworth, Ph.D., is a 2013 MacArthur Fellow and professor of psychology at the University of Pennsylvania. An expert in non-I.Q. competencies, she has advised the White House, the World Bank, NBA and NFL teams, and Fortune 500 CEOs.
Prior to her career in research, she taught children math and science and was the co-founder of a summer school for low-income children that won the Better Government Award from the state of Massachusetts. These experiences sparked her theory of “grit” as a predictor of success.
Summary: In this TED Talk, Angela explores the science of why some people succeed and others fail, and why talent alone doesn’t guarantee success. She shows us that perseverance (a.k.a., grit) and passion matter at least as much as talent and intelligence.
Can this perseverance be taught? Angela leans on science to conclusively argue for harnessing a growth mindset that defines learning as an ability that is not fixed; our ability to learn can change and grow with effort and in response to challenge.
Takeaway: Talent doesn’t make you great. Your success in life depends on your ability to persevere.
Bonus: Check out Angela’s interview during her visit to Google’s NYC office to discuss her book, “Grit: The Power of Passion and Perseverance” with Ben Fried, Google’s CIO and Site Lead in NYC.
5. David Allen | “The Art of Stress-Free Productivity”

Credentials: David Allen is a productivity consultant who is best known as the creator of the time management method known as “Getting Things Done.”
Summary: Being present is a continuous practice. David discusses the concept of “psychological bandwidth,” and reminds us that the more something is on our mind, the more it’s not happening in real life. Put another way, whatever is on our mind is only there because we haven’t “parked the results.” Thankfully, David proclaims that we don’t have to finish things to get them off our mind. Rather, he discusses the need for productive engagement, which leads to stress-free productivity.
This TED Talk is very slow to pick up speed, and really starts to take off around the 18-minute mark, so feel free to skip ahead. At that point in the video, David begins to break down how to deal with everything that’s pulling on your mind, giving each of us the task of stepping outside of our heads in order to take a big picture view.
Takeaway: The practice of writing down everything that pulls on your mind will clarify your priorities, which will make you vastly more productive.
6. Dan Pink | “The Puzzle of Motivation”

Credentials: Dan Pink has a trio of influential bestselling books under his belt, all meant to change the way companies view the modern workplace. He recommends a shift from an information-based corporate culture to a conceptual base where creativity and big-picture design can transform productivity and stabilize results.
Summary: Dan makes what he calls a “lawyerly case” for rethinking how we run our businesses. He examines the puzzle of motivation, offering compelling information that demonstrates how an environment built around carrots and sticks isn’t effective for the 21st-century workplace.
Takeaway: Traditional rewards aren’t always as motivating or effective as we think.
7. Jason Fried | “Why Work Doesn’t Happen at Work”

Credentials: Jason Fried is the co-founder and president of 37signals, a Chicago-based company that builds online productivity tools that include Basecamp, Highrise, Backpack, Campfire, Ta-da List, and Writeboard. 37signals also developed and open-sourced the Ruby on Rails programming framework. Fried is the co-author of the book Rework that features new ways to conceptualize working and creating that help people do less and create more.
Summary: Jason suggests that the office isn’t a good place to get work done, because managers and meetings (the main problems, which he calls the M&Ms) constantly interrupt progress. He illustrates how sleep and work are very closely related, since both are phase-based events (e.g., they happen in stages).
Sleep has five stages. To get to the deep, meaningful stages you must go through the early ones. If you get interrupted in the early stages, you must start again. Do we expect someone to sleep well if they’re being interrupted all night? Of course not! So how can we expect people to go to work and be productive/get things done if they’re always being interrupted…?
Takeaway: Jason offers three suggestions that allow people to get work done without disrupting workflow.
CONCLUSION
Fixed mindsets damage our ability to acquire new skills. Such a mindset is scientifically proven to negatively affect our ability to succeed at personal relationships, professional success, and many other dimensions of life.
Given the facts, why would we ever embrace any other mindset than growth? It’s a surefire way to double your productivity and work toward sustainable business growth.
So start developing that mindset today. All that’s truly necessary is to begin viewing challenges and failures as opportunities to improve your learning and skills. Good luck!