This Will Be The Biggest Buyer Of Stocks In 2018

In July, many were surprised to learn (even though we have shown this many times prior), that according to Credit Suisse analysts there has been just one buyer of stocks since the financial crisis: the corporate sector, also known as “stock buybacks.” 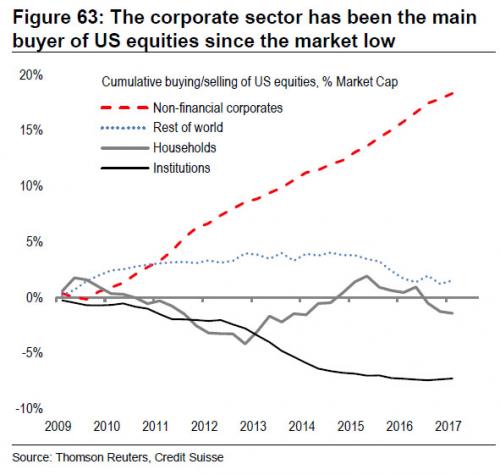 Well, don’t change the channel, because according to Goldman’s just-released forecast of fund flows in 2018, it will be more of the same as the single biggest buyer of stocks next year will be the same one as before: corporations buying back stock, some $590 billion of it to be precise, and more than all other sources of stock purchasing in the coming year combined. In fact, without buybacks, instead of net equity demand of $400 billion in 2018, there would be nearly $200 billion of outflows, something not seen since the financial crisis.

Here’s the summary from David Kostin: “Corporate buybacks and ETF inflows will drive US equity demand in 2018. We forecast corporate equity demand will rise by 3% to $590 billion next year. Increased authorizations and high cash balances should more than offset headwinds to buybacks from high valuations.”

In addition to buybacks, Goldman is confident that the passive investing euphoria will continue, and expects expect investor purchases of ETFs to hit a record high of $400 billion in 2018. Investor preference for passive vs. active funds should continue to drive demand for ETFs

Meanwhile, Goldman predicts that active investors will continue to liquidate holdings, and mutual funds will remain net sellers of equities in 2018 while foreign investors will reduce net buying.

We forecast mutual funds will sell $125 billion of equities in 2018, in line with net equity demand during the past two years. We expect stable US GDP growth and a flat US dollar will support $100 billion of foreign investor demand for US equities next year.

Some more details on next year’s near-record corporate buybacks:

CORPORATIONS: We forecast corporations will purchase $570 billion (-9%) of US equities in 2017 and $590 billion (+3%) in 2018 primarily through share buybacks (net of issuance). During 1H 2017 there was a considerable slowdown in repurchase activity given elevated policy uncertainty. Net buybacks are on pace to fall by 21% vs. 2016. Consequently, we lower our 2017 corporate demand forecast to $570 billion from $640 billion, implying a decline of 9% vs. 2016. However, our estimate still assumes an acceleration in net buybacks in 2H vs. 1H given a 60% expected increase in Financials buybacks due to CCAR results and buyback seasonality (2H usually comprises around 60% of annual buybacks). Net buybacks should rise by 3% in 2018 given an increase in repurchase authorizations including and excluding Financials, high cash balances, and solid earnings growth. However, extended valuation should limit substantial buyback growth. Rising interest rates and the underperformance of stocks focused on buybacks could pose additional headwinds to total corporate equity purchases.