Commentary
The market momentum I described in the last T2108 Update titled “A Different Kind of Breakout” has clearly wound down a bit. No one should be surprised by this sudden change given the latest terrorist activity in Belgium that itself follows closely upon similar atrocities in Turkey and the Ivory Coast. These are the kinds of events that cannot be anticipated but must be accounted after the fact. After the fact, these tragedies found a market floating on good momentum and ever-strengthening sentiment alongside a broadening rally. The weight is now heavy in more ways than one. At least I personally cannot help shake that sinking feeling even as I know this too shall pass. In other words, expecting a pullback for the S&P 500 (SPY) at this juncture that tests 200DMA support seems almost like a no-brainer…especially given such a test is only a 1% drop away. 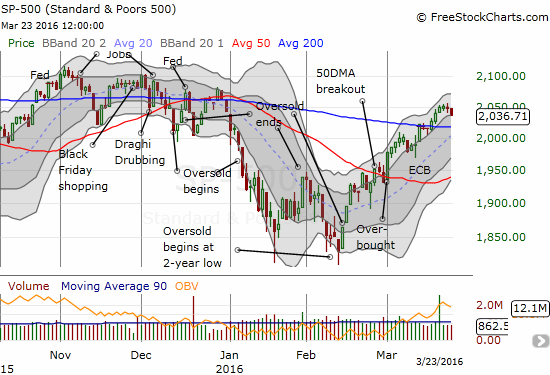 The S&P 500 is now clinging to its nice uptrend channel (between Bollinger Bands). A retest of 200DMA support is now in play.

My favorite technical indicator, T2108, the percentage of stocks trading above their respective 40-day moving averages (DMAs) first went overbought on March 1st. It set the tone for trading for most of this month. However, after hitting the 80% range on March 3rd, T1208 has made no further progress. T2108 closed today at 81.6%. This lack of progress is fine if T2107, the percentage of stocks trading above their respective 200DMAs, is still making progress. Unfortunately, that progress came to a halt this week. T2107 has now recorded its first 3-day losing streak since the bounce from oversold conditions began on February 12th. It closed today at 39.3%. Even though the losses have been marginal, I am raising my alert level a bit.