So You Wanted To Be “Long Electricity” Into The Eclipse?

Home » Finance » So You Wanted To Be “Long Electricity” Into The Eclipse?

Energy traders who had hoped to make an easy profit by betting that spot electricity prices would climb around midday on Monday – an idea they may have found on this website – were bitterly disappointed when, instead of spiking, prices tumbled because of an unexpectedly large drop in demand.

Utilities and grid operators had contingency plans ready to compensate for the expected drop in solar. But even with utilities’ backup grids humming, supplies were still widely expected to drop. Instead, energy providers encountered something that they hadn’t anticipated – what one trader called “an irregular human behavior pattern.” 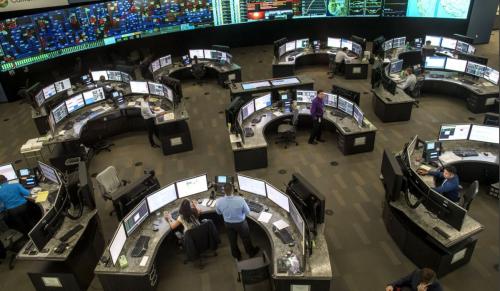 Basically, more Americans than anticipated were outdoors during the middle of the day Monday, around the time when electricity demand typically peaks, than grid operators had expected. Therefore, while supplies took a slight dip, it was amplified by a dramatic pullback in demand, which exhibited a weird U-shaped dip over a two-hour period across the country,” according to Bloomberg. Ironically, if traders hadn’t been so distracted by the eclipse, maybe they would’ve realized that millions of Americans standing outside together staring up at the sun for an hour would have a marked impact on demand, and adjusted their positions accordingly.

“This was a bummer for traders who’d bet prices would jump as a whole load of solar-produced megawatts faded to black. “If anything, it was bearish from a trading perspective because people were more busy looking at the eclipse and talking about the eclipse,” said Tom Hahn, vice president of U.S. power derivatives at brokerage ICAP Energy LLC in Durham, North Carolina.

Spot power in California fell to negative levels as the eclipse wiped out and restarted thousands of megawatts of solar power, and they also dipped from Texas to New York. While natural gas demand rose to a one-month high on Monday, spot prices at several hubs weakened versus the U.S. benchmark.”