The economy has been improving in 2017 as global trade lifts off. We’ve had one of the most unusual scenarios take place this year. As you can see in the chart below, the Fed loan officer survey shows that the credit conditions have eased despite the Fed raising rates That’s not usually how it works, but the economy has been helped along by the global central banks’ record stimulus in the first half of 2017. The second half won’t be as accommodative as the first half. The real tightness will start in the middle of 2018 if the expectations are met. As you can see, when credit conditions ease, the stock market rises. There are some bullish investors who think that correction in 2016 will lead to another few years of economic growth. It’s not impossible, but it will have to happen without stimulus. This would be the first real growth the economy has seen this recovery. At some point, inflation will weigh on the recovery, but we are at least a few quarters away from that.

The unemployment rate is low like it usually is at the end of the business cycle, but it doesn’t show the amazing changes in the workforce. Workers are becoming independent contractors instead of working for one employer. Secondly, the baby boomers are just starting to retire which is putting pressure on wage growth. Thirdly, the type of work is changing as services take share from manufacturing. The loss of manufacturing jobs has become a politically contentious topic, but it doesn’t need to be. The chart shows that the U.S. is normal when looking at the other developed countries. The loss in manufacturing employment is coming from changes in tastes, improvements in robotic technology, and other factors such as outsourcing. 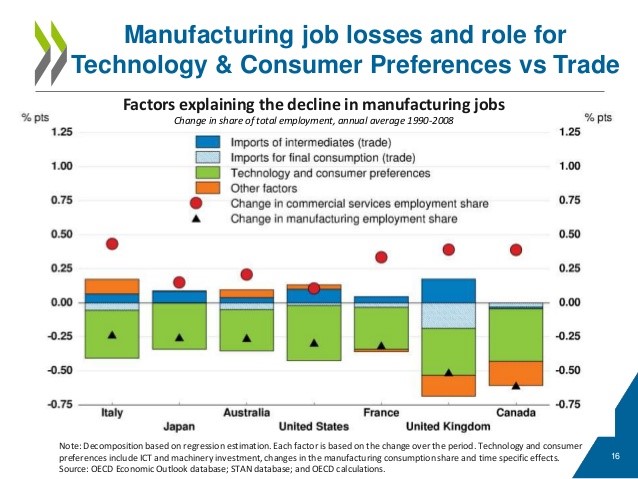 There weren’t any economic reports on Monday, but Tuesday was jam packed with them. One of the most important reports was retail sales which beat expectations. Retail sales had their biggest increase in 7 monthswhich should bolster GDP growth. Retail sales were up 0.6% as consumers made more discretionary purchases and surprisingly bought motor vehicles. One of the reasons for the increase in purchases is that prices for new motor vehicles had their biggest drop in almost 8 years and have fallen for 6 straight months. This means demand is being helped by discounting which won’t boost production and help the economy. It’s still way too early to tell where GDP growth will be, but this retail sales report is a great sign. Both June and May were revised higher by one tenth. On a year over year basis the July retail sales were up 4.2%. This has boosted the dollar slightly. I’m still bearish on the dollar, but anytime an economic report beats expectations, it will shoot up.