Philly Fed Back In Contraction, Index Below Any Economist’s Guess

Home » Finance » Philly Fed Back In Contraction, Index Below Any Economist’s Guess

Ho hum. Another manufacturing report, and another debacle. The Philly Fed report came in much worse than expected and is back in contraction at -5.9, below the Econoday Consensus estimate of 1.2 and even below the lowest economist’s estimate of -5.0.

The negative headline, below Econoday’s low-end estimate, isn’t even half of story for the December Philly Fed report which is pointing to another rough month for the nation’s factory sector. The headline index came in at minus 5.9 for its third negative reading in four months. New orders have been in the negative column for the last three months, at a steep minus 9.5 in today’s report. Unfilled orders, which popped up slightly in November, are back in the minus column and deeply in the minus column at 17.7.

Manufacturers in the Philly Fed’s sample worked down their backlogs to keep up shipments which came in on the plus side at 3.7. But without new orders coming in, shipments are bound to fall. Employment, likewise, is bound to fall though it did hold in the plus column for a second month in a row at 4.1 in December. Ominously, price data are beginning to turn deeply negative, at minus 9.8 for inputs and minus 8.7 for final goods — the latter an indication of weakening demand.

Another ominous detail in the report is a breakdown in the 6-month outlook, down more than 20 points to 23.0 which is low for this reading. Expectations for future orders are especially weak. Today’s report falls in line with Tuesday’s Empire State report and are both reminders that weak global demand, together with the breakdown in the energy and commodity sectors, are pulling down the nation’s factory sector. 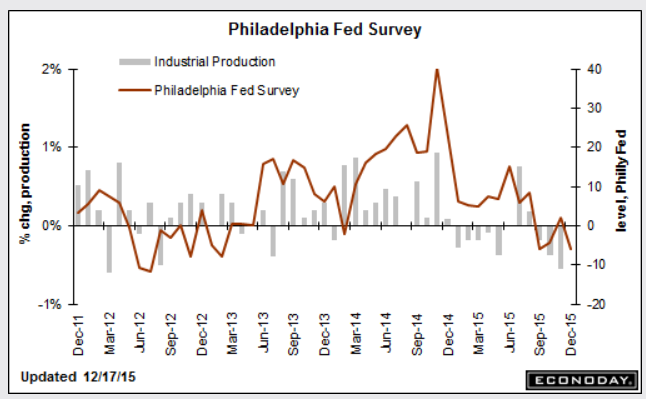 The Philly Fed manufacturing region is back in contraction following a very brief stint in positive territory last month to 1.9.

Let’s recap what Bloomberg said last month vs. what I said in

…The average workweek is down very sharply in the Mid-Atlantic factory sector, at minus 16.2 which doesn’t point to strength ahead for employment.

There’s good news and bad news in this report but compared to the report’s own trend, the news is mostly good and underscores Tuesday’s strong bounce in the manufacturing component of the industrial production report. Not strong at all, however, have been some other regional Fed reports with Kansas City to give its November update tomorrow.