The University of Michigan Final Consumer Sentiment for November came in at 98.5, down 2.2 from the October Final reading of 100.7. Investing.com had forecast 98.0.

Consumer sentiment narrowed its loss from mid-month, although it was still slightly below last month’s decade peak. Overall, the Sentiment Index has remained largely unchanged since the start of the year at the highest levels since 2004. What has changed recently is the degree of certainty with which consumers hold their economic expectations. In contrast to the media buzz about approaching cyclical peaks and an aging expansion, with the implication of greater uncertainty about future economic trends, consumers have voiced greater certainty about their expectations for income, employment, and inflation. Inflation expectations have shown the smallest dispersion on record, and increased certainty about future income and job prospects has become a key factor that has supported discretionary purchases. To be sure, caution is warranted given that the current expansion will soon be the second longest expansion since the mid-1800s, as well as the potential for significant changes in tax policies and the new Fed leadership and Board members. Interestingly, the data indicate that neither changes in fiscal nor monetary policies have yet had any noticeable impact on consumer expectations. Overall, the data signal an expected gain of 2.7% in real consumption expenditures in 2018, and more importantly for retailers, the best runup to the holiday shopping season in a decade. [More…]

See the chart below for a long-term perspective on this widely watched indicator. Recessions and real GDP are included to help us evaluate the correlation between the Michigan Consumer Sentiment Index and the broader economy. 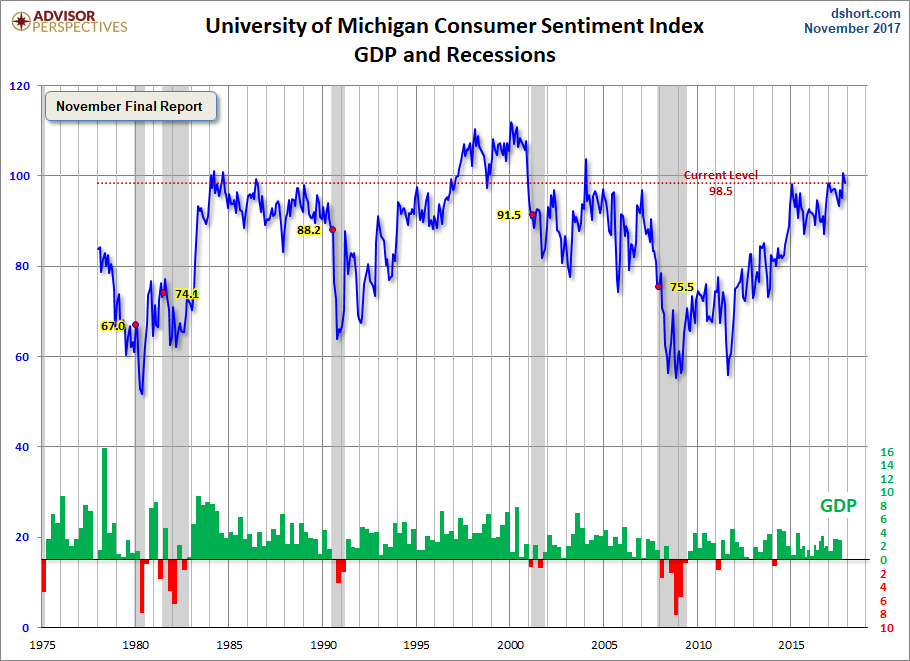 To put today’s report into the larger historical context since its beginning in 1978, consumer sentiment is 14.9 percent above the average reading (arithmetic mean) and 16.2 percent above the geometric mean. The current index level is at the 89th percentile of the 479 monthly data points in this series.

As The Chinese Economic Cycle Turns, So Do The Fortunes Of The Australian Dollar
EUR/USD – Euro To 1.1670
German PMIs Mixed – EUR/USD Wobbles