The XAU/USD pair closed the day slightly lower that opening but remained within the trading range of the previous two days. The precious metal traded as high as $1213.26 an ounce but pulled back to the $1207.70 – 1200 area after the ECB president Mario Draghi said that policy makers discussed buying all assets except gold. The latest weekly jobless claims data which came in better than expectations put pressure on the market as well. The number of first-time applicants for jobless benefits dropped by 17K to 297K, according to a report released by the Labor Department.

The markets’ focus has shifted to the U.S. jobs report which will be released later today. At its last meeting, the Federal Reserve stressed that economic data will dictate the timing of any interest rate increases. Since the greenback’s strength and appetite for riskier assets are gold’s biggest enemy, we will watch the data closely. In the meantime, it appears that the market will be spending some more time in the 1212 – 1200 region.

The area defined by the Ichimoku clouds on the daily chart (starting from the 1220 level and going all the way up to 1240) is the first major hurdle for the bulls. In other words, the market has to anchor somewhere above the 1240 resistance in order to consider the possibility of a higher move. But of course, if the bulls want to reach this destination, they have to penetrate the 1212 level. However, if the bears manage to drag the XAU/USD pair below the 1202.70 – 1202 zone, it is likely that we will see the pair testing the next support levels at 1196 and 1193/1. A close below the 1191 level would suggest that the bears will be targeting 1186 and 1181 next. 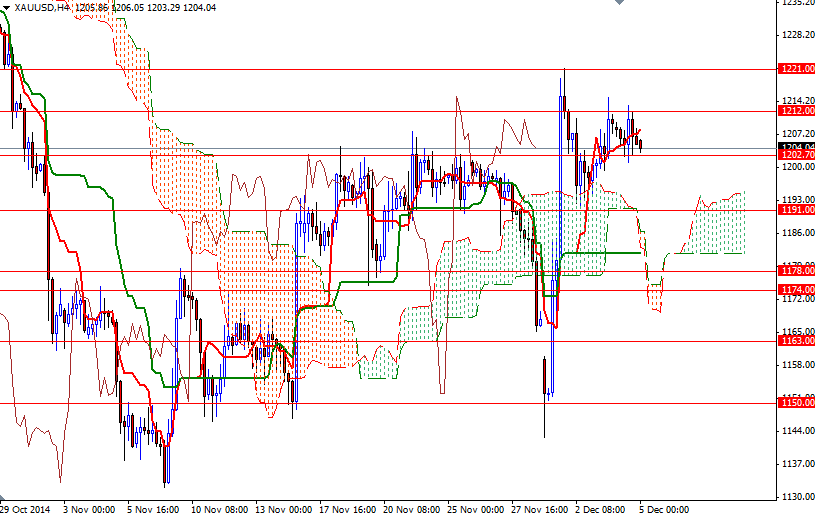 Burma to borrow from World Bank after 25 years
Aussie Dollar Continues To Remain Bearish
What 2 Things Can Accenture Depend On This Quarter?