While understandably all eyes have been fixed on every monthly capital outflow update from China (even the ones that the Politburo is clearly massaging), few have noticed that one of the biggest total outflows currently in the global developed economy is taking place right in America’s own back yard.

According to BofA’s Kamal Sharma, Canada’s basic balance – a combination of the capital and the current account: a measure of national accounts that spans everything from trade to financial-market flows – swung from a surplus of 4.2% of GDP to a deficit of 7.9% in the 12 months ending in June. That’s the fastest one-year deterioration among 10 major developed nations.

Citing Sharma’s data Bloomberg writes that “money is flooding out of Canada at the fastest pace in the developed world as the nation’s decade-long oil boom comes to an end and little else looks ready to take the industry’s place as an economic driver.” In fact, based on the chart below, the outflow is the fastest on record. 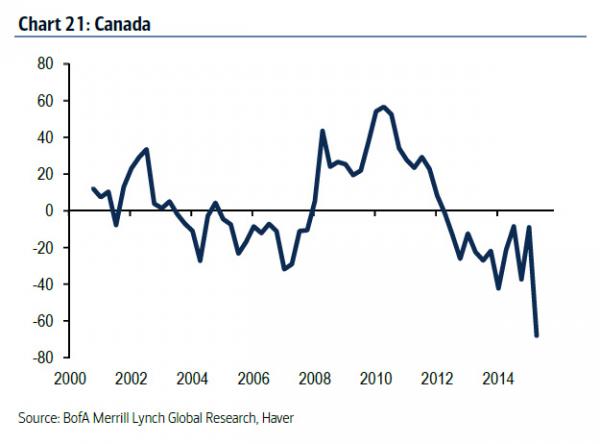 “This is Canadian investors that are pushing money abroad,” said Alvise Marino, a foreign-exchange strategist at Credit Suisse Group AG in New York. “The policy in Canada the last 10 years has greatly favored investments in energy. Now the drop in oil prices made all that investment unprofitable.”

The reasons for the accelerating otflows are familiar, or mostly one reason: the collapse in crude oil, among the nation’s biggest exports, has dropped to half of its 2014 peak. “The slump has derailed projects this year in Canada’s oil sands – one of the world’s most expensive crude-producing regions. Royal Dutch Shell Plc’s decision to put its Carmon Creek drilling project on ice last week lengthened that list to 18, according to ARC Financial Corp.”

Worse, there does not appear to be any improvement, despite the recent stabilization in Brent prices: