Following two days of rangebound moves, where Monday’s modest market rebound was undone by the Tuesday just as modest decline (despite the early surge higher on the latest “bullish for stocks” European terrorism), overnight equity action continued to be more of the same, and as of this moment S&P 500 futures were unchanged, while European stocks were modestly higher. But while equities remain surprisingly uneventful despite loud warnings by both JPM and Goldman now that another bout of volatility and equity downside is coming, in FX there has been a substantial change, one which has seen the US dollar rise for a fourth day, the longest winning streak in a month, driven by the latest round of hawkish Fed jawboning courtesy of the Chicago Fed’s Charlie Evens yesterday, which in turn has pushed down prices of oil, gold and copper. 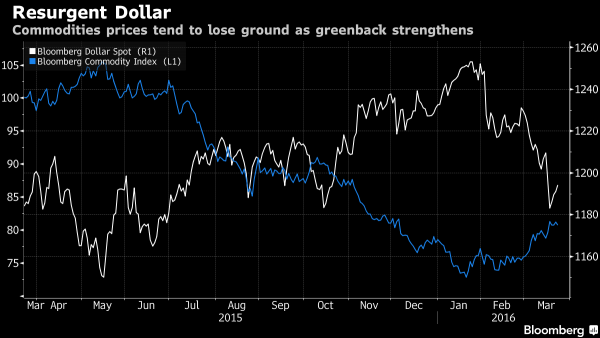 As noted earlier by Bloomberg, the greenback gained against almost all of its major peers, with only the Japanese yen keeping pace, after a Federal Reserve official commented on the interest-rate outlook. This is in line with a warning issued by JPM yesterday, according to which selling of USD is about to fall out of vogue as it heads for worst month since 2011. The bank said hedge funds cut bets on further gains in dollar to the lowest since 2014 prior to last week’s Fed meeting, and with speculators having already ditched the U.S. currency, few are left to sell and push it down further, making greenback less susceptible to outflows of hot money. The last 4 days appear to have confirmed just this.

Elsewhere, the British pound fell to a one-week low after the explosions that killed at least 31 people in the Belgian capital stoked bets on the U.K. leaving the European Union. And speaking of terrorism, some were surprise that the initial selloff transformed into a surprising rally after yesterday’s bomb Brussels explosions, although as we showed, this is precisely the pattern followed by markets following terrorist events. 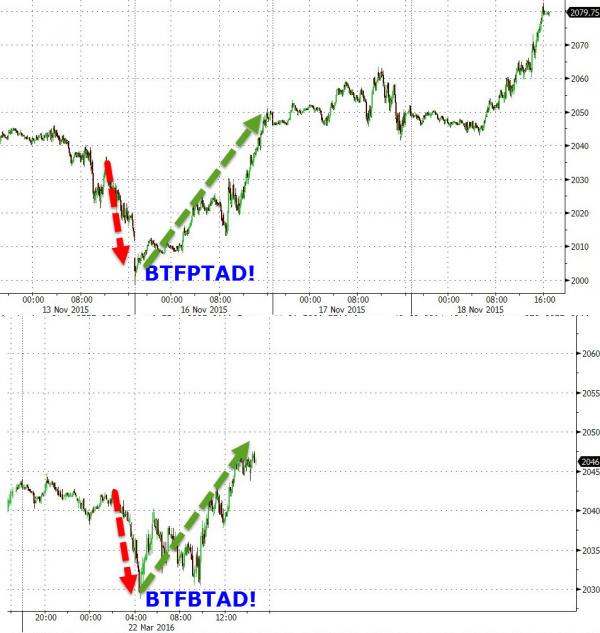 “Usually such attacks will have only a short-term impact,” said Chris Green, an Auckland-based strategist at First NZ Capital Group Ltd., a brokerage and wealth management firm. “Investors focus remains on macro-economic fundamentals and we do need to see more signs of sustainability in the U.S. economy and some stability in the Chinese data. I’m somewhat cautious given the recent rally we’ve seen.”

Still, others expressed a more skeptical outlook than merely being swayed by the manipulated price action: “There is a growing perception among European public opinion that EU leaders are not in control of the continent’s terrorist threat,” Mujtaba Rahman, director of European analysis at Eurasia Group, said in a note to clients. “This will in turn put more pressure on incumbent governments and limit their space for policy action to address Europe’s multiple crises.”

In any case, as a result of the stronger dollar and weaker euro, European stocks rose, more than recouping losses recorded after Tuesday’s deadly terror attacks in Brussels. The Stoxx Europe 600 Index rose 0.4 percent, the biggest gain in more than a week. Futures on the Standard & Poor’s 500 Index were little changed, while the MSCI Asia Pacific Index slipped 0.8 percent from its highest close since Jan. 1.

Where markets are at this moment: