The latest Conference Board Consumer Confidence Index was released this morning based on data collected through October 18. The headline number of 125.9 was an increase from the final reading of 120.6 for August, an upward revision from 119.8. Today’s number was above the Investing.com consensus of 121.0.

Here is an excerpt from the Conference Board press release.

“Consumer confidence increased to its highest level in almost 17 years (Dec. 2000, 128.6) in October after remaining relatively flat in September,” said Lynn Franco, Director of Economic Indicators at The Conference Board. “Consumers’ assessment of current conditions improved, boosted by the job market which had not received such favorable ratings since the summer of 2001. Consumers were also considerably more upbeat about the short-term outlook, with the prospect of improving business conditions as the primary driver. Confidence remains high among consumers, and their expectations suggest the economy will continue expanding at a solid pace for the remainder of the year.”

Putting the Latest Number in Context

The chart below is another attempt to evaluate the historical context for this index as a coincident indicator of the economy. Toward this end, we have highlighted recessions and included GDP. The regression through the index data shows the long-term trend and highlights the extreme volatility of this indicator. Statisticians may assign little significance to a regression through this sort of data. But the slope resembles the regression trend for real GDP shown below, and it is a more revealing gauge of relative confidence than the 1985 level of 100 that the Conference Board cites as a point of reference. 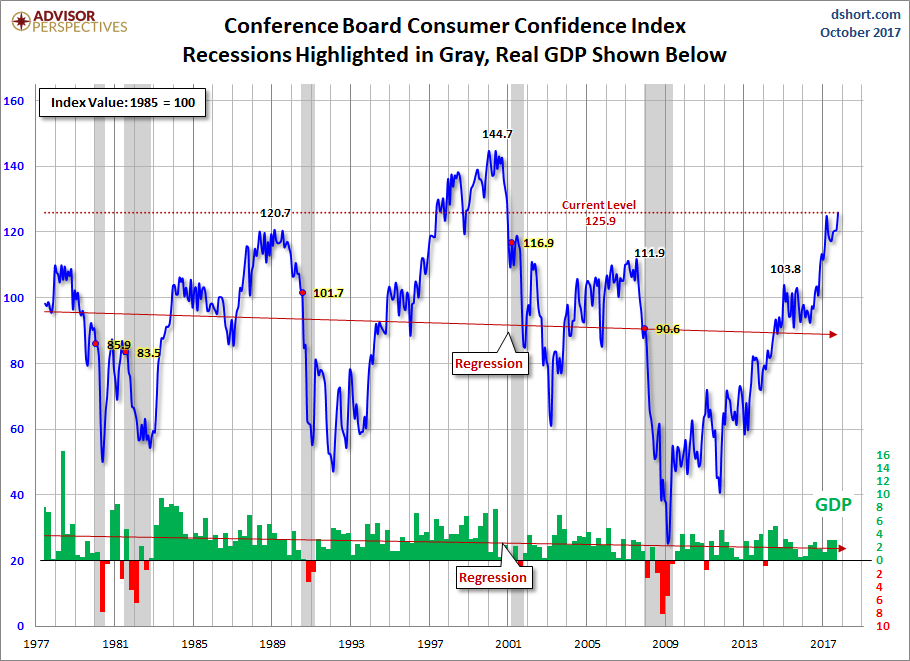 On a percentile basis, the latest reading is at the 91st percentile of all the monthly data points since June 1977, up from the 90th percentile the previous month.

For an additional perspective on consumer attitudes, see the most recent Reuters/University of Michigan Consumer Sentiment Index. Here is the chart from that post.

Where Next For The USD After The FOMC Minutes?
Concert Pharmaceutical - Chart Of The Day
Binary Options Trading Opportunities - December 16, 2015