One set of indices that seems to cycle from positive to negative over a relatively short period of time are the Citigroup Economic Surprise Indices (CESI). This aspect of these indices means they gain prominence from a commentary standpoint when they reach high and low points. What is important for investors to know is the CESI is a mean reverting index, that by design, cycles between highs and lows over relatively short periods of time. In June of this year, the Citigroup U.S. Economic Surprise Index (CESI-US) was minus 78 after falling from plus 57 in March. At the June low some commentary began noting the U.S. economy might be headed for a recession. However, the correlation of the S&P 500 Index to the CESI-US is a small negative .04, so actually a slight negative correlation between the two variables. 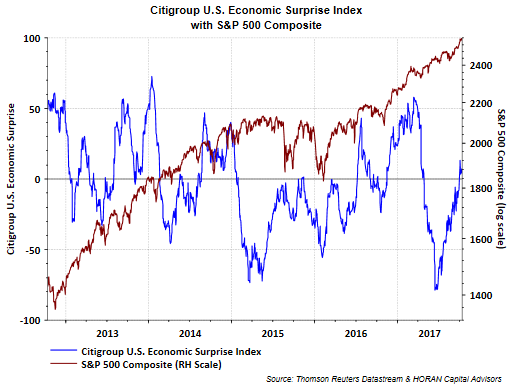 What is important to note about the CESI is Citigroup designed the index for uses as a model in its FX unit. Specifically, Citigroup noted in May of this year and discussed in a Financial Times article,

“The Citi Economic Surprise Index is a perfect example of unique proprietary design which has almost no bearing on those who discuss it. The models were built by quantitative analysts in Citi’s FX unit and were structured for currency trading. Thus, if the CESI wiggles one way or another, investors get signals to buy the yen or the euro or the loonie, etc. It was not meant to be used for stock prices or for Treasuries, but coincident rather than causal relationships are relied on even if they have no consistency whatsoever.”

Bloomberg defines the CESI as follows, and note the FX reference,

“The Citigroup Economic Surprise Indices are objective and quantitative measures of economic news. They are defined as weighted historical standard deviations of data surprises (actual releases vs Bloomberg survey median). A positive reading of the Economic Surprise Index suggests that economic releases have on balance [been] beating consensus. The indices are calculated daily in a rolling three-month window. The weights of economic indicators are derived from relative high-frequency spot FX impacts of 1 standard deviation data surprises. The indices also employ a time decay function to replicate the limited memory of markets.”