Global shares hit another record high on Wednesday, propelled higher by what increasingly more call (ir)rational exuberance, and investors’ unflagging enthusiasm for tech stocks. That said, S&P futures are unchanged the morning before Thanksgiving (at least before the market open ramp), as are European stocks (Stoxx 600 is flat), despite the euphoria in the Asian session which saw the MSCI Asia Pac index hit a new all time high… 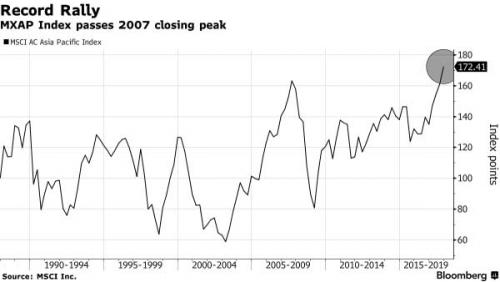 … as oil jumped, rising as much as $1.15 to $57.98/bbl, the highest since July 2015, following yesterday’s API report which showed crude stocks fell another 6.4mmbbls and a Keystone pipeline outage sharply tightened the market, while the dollar fell after Janet Yellen warned against raising rates too fast and the euro gained amid new moves to end Germany’s political impasse.

Emerging markets too were on a roll, lifted by a weaker dollar and inflows into Asian assets, with little sign of spillover from Turkey where the lira plumbed a new record low.

As SocGen previews today’s action, “the US has durable goods orders, U-Mich consumer sentiment, jobless claims and FOMC Minutes out today, but none of these matters as much as Thanksgiving preparations.” In other words, expect a much slower trading day, with the key event – the Fed minutes – delivered at 2pm to trading desks staffed by the sub-30-year-old team.

So as we prepare for even more all time highs amid the stock euphoria, the bond market has been showing fixed-income traders are more concerned that the U.S. economy may slow, with the 2s10s flattening further below 60 bps. Outgoing Fed chair Yellen warned Tuesday that tightening too quickly risked stranding inflation below the Fed’s 2 percent target, with investors awaiting the release of minutes from the last FOMC meeting for more clues about the policy path. As a result, the Bloomberg Dollar Spot Index dropped 0.2%, hitting a one-month as cautious Yellen and curve flattening underpin selling momentum.

As we noted earlier, Asian stocks hit new all time highs, with Hong Kong’s Hang Seng jumping 1%, and rising above 30,000 for the first time in 10 years, as Hong Kong-listed Tencent leapt past Facebook this week to become the world’s fifth-most valuable company.

The only fly in the Asian ointment was that China’s government bonds extended declines, with the benchmark 10-year yield rising 4 basis points to 4.03% to head for the highest close since 2014. How much longer before China finds itself in a funding squeeze and the recent euphoria crashes?

“The earnings picture is dominant and that’s of course what has, and will continue, to move markets,” Bob Doll, chief equity strategist at Nuveen Asset Management, told Bloomberg TV. “Icing on the cake is the tax bill and that does boost earnings but a lot of people are already baking that into their assumption.”

While there was little of note in global bond or equity markets, the biggest overnight story is the on-going strength of oil prices, jumping to more than 2 year highs as a result of the latest API inventory numbers and the TransCanada pipeline interruption, which helped NOK and CAD within G10 currencies.  Haven currencies also outperform on potential hedging amid global stocks and oil rally; euro gains to stay below pivotal 55-DMA resistance amid chances that a German grand coalition may be achieved.

“WTI is, for a change, in the driving seat,” says Ole Hansen, head of commodity strategy at Saxo Bank. “The spread is tightening and if we have a prolonged disruption then that will play its part in bringing down inventories further in the US.”

On the US political front, US Senator Murkowski who is seen as a key moderate swing vote, is said to support repealing of ObamaCare’s individual mandate. Earlier, Janet Yellen said the Fed must keep an open view and not be trapped by forecasts and said so far so good in terms of reducing the balance sheet. Yellen also commented that she is uncertain whether low inflation is transitory and is keeping an open view that it could be long-lasting.

In Europe, Angela Merkel’s party is betting on a revived alliance with the Social Democrats to dodge the risk of new elections after coalition talks with two other parties broke down, Bloomberg reported although other news sources were skeptical. The goal is to avoid new elections and appeal to the need for German stability at a critical time for the country and the European Union “amid nationalist pressures and challenges posed by Brexit.”

The yield curve in Germany, the euro zone’s benchmark government bond issuer, flattened to its lowest in more than two months, catching up with the U.S. curve. According to Bloomberg, there was heavy bear flattening seen in early trade, with the 5Y sector underperforming with focus on Coeure’s speech yesterday which suggested moving forward guidance away from QE and onto rate hikes. USTs were dragged lower in tandem, however, U.S. curve is marginally steeper.

The Incredible Silver Trade – What You Need To Know
Should We Raise The Inflation Forecast? Business Strategies For Changing Costs
Did A Tap On The Shoulder "Prevent" The US Economy From Sliding Into Recession?