British actor Eddie Redmayne won best actor in a drama for his role as physicist Professor Stephen Hawking in The Theory of Everything.

The awards, which cover both film and TV, saw Froggatt win best supporting actress in a TV series for her role as the maid Anna Bates in Downton Abbey.

Wilson was named best actress in a US TV drama for The Affair.

Collecting the best director award, Linklater said: “I want to dedicate this to parents that are evolving everywhere and families that are just passing through this world and doing their best.

“Bottom line is we’re all flawed in this world. No one’s perfect.”

Meanwhile, Redmayne beat competition from fellow Brits Benedict Cumberbatch (for The Imitation Game) and David Oyelowo (for Selma) to the best actor award.

On collecting his trophy, Redmayne revealed he cut short his honeymoon to attend the ceremony in Beverly Hills. He said: “I promised her sunshine – it wasn’t so great today – but thanks for giving us a honeymoon we’ll remember.”

The actor was the only Briton to win an award in the film categories despite a strong showing in the nominations.

His co-star Felicity Jones missed out on the best drama actress award to Julianne Moore, who played an academic with early onset Alzheimer’s in Still Alice.

Rosamund Pike and Keira Knightley were also nominated for their parts in Gone Girl and The Imitation Game respectively, but were both disappointed.

Comedy drama Birdman had led nominations going into the ceremony with seven nods. The film collected two awards – one for Michael Keaton as best actor in a comedy or musical and one for best screenplay.

An emotional Keaton said: “You have no idea what this means to me. I want to thank the Hollywood Foreign Press for even having a comedy category.”

Whiplash star JK Simmons collected the prize for best supporting actor. He thanked his co-star Miles Teller for being a person he wanted to “slap in the face”, referencing a memorable scene in the film. 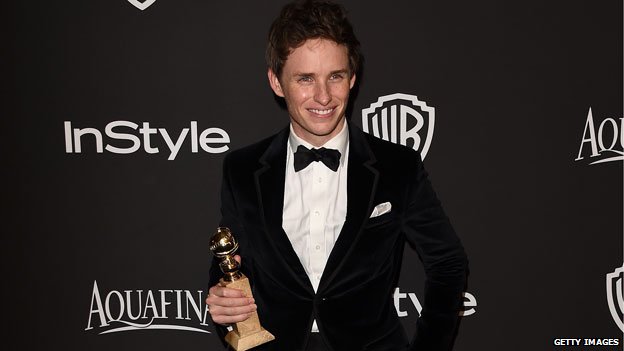 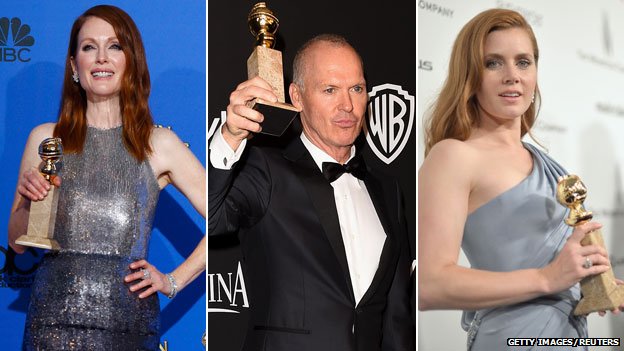 Despite being nominated for five awards, Alan Turing drama The Imitation Game came away empty-handed, as did thriller Gone Girl, which had four nominations.

Many actors spoke of their support for free speech following the Charlie Hebdo attacks in Paris last week.

Some held “Je suis Charlie” signs on the red carpet, while others referred to it on stage.

George Clooney, who was awarded the Cecil B DeMille lifetime achievement award, ended his acceptance speech by commenting on the marches which took place around the world on Sunday. He said: “They didn’t march in protest, they marched in support of ‘we will not walk in fear.'”